Sign In
Register
Are you a developer (or a speaker) looking to create an article for your game on the IndieCade Wiki? Check out this guide for Quick and Easy Article Creation.

Dialect: A Game about Language and How it Dies

Dialect: A Game about Language and How it Dies is a title featured at [[ ]].

About Dialect: A Game about Language and How it Dies 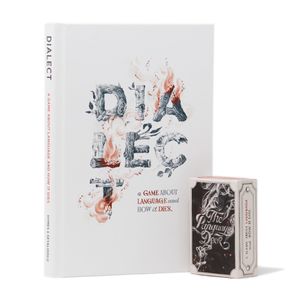 Dialect comes with a hardcover rulebook and language generation card deck used over the course of the game.

Dialect is a game about an isolated community, their language, and what it means for that language to be lost. In this game, you’ll tell the story of the Isolation by building their language. New words will come from the fundamental aspects of the community: who they are, what they believe in, and how they respond to a changing world.

Players take away both the story they’ve told and the dialect they’ve built together.

Dialect is currently available for purchase directly from Thorny Games. 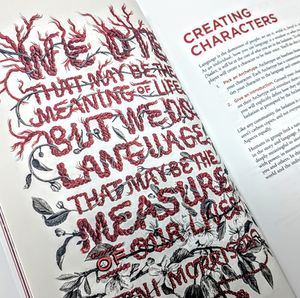 Interior shot of Dialect, with artwork by Jill DeHaan.

In Dialect, players take turns changing the language as time goes on and using that language as members in the community. It's a collaborative effort and doesn't use a gamemaster.

The first step of any game is creating our community. At the start, we pick a backdrop which forms the world in which the Isolation exists (more on backdrops below). Next, we make the world our own by defining three aspects for our community. These will be the touchstones of our society, and will be the initial seeds from which our language grows.

"This is a game about how language, culture, and thought interact. And that's amazing!" --Alex Roberts (Backstory Podcast)

Winner of the 2019 IGDN Game of the Year, and Silver ENnie for Best Game.